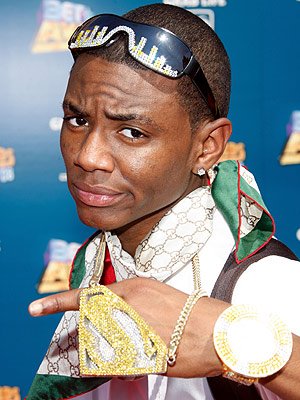 Can Soulja Boy learn a thing or two from Barack?

“I’m the man you think you are.” El Hajj Malik Shabazz (Malcolm X)

So, what can African American men learn from the journey of Barack Obama?

2). President-Elect Barck Obama is an educated man from a low to moderate income background. His family didn’t have money to send him to college. He earned his way through having top grades which equals scholarships! An education is the foundation for a stable future. School is the proving ground to life-long learning. African American men should accept that their future depends on being able to comprehend, ascertain and mentally develop the sophisticated skills needed to be employable. School is not just for chumps and fools. It is for EVERYONE. If you liked the polish and classy way President-Elect Barack Obama conducted himself throughout the campaign, know that he didn’t develop that skill by hangin’ out at the local spot, vegetating to the sounds of Souljah Boy, Plies, Lil Wayne, Jeezy, Fifty Cent, Game, or Dj Khalid. President-Barack Obama didn’t learn the art of communication or public speaking from slingin’ rocks, H, and weed in the crack house.

3). President-elect Barack Obama surrounded himself with a team of educated, experienced people that helped him to win the Presidency. Having a support system is always important. African American men who want to succeed need to understand the importance of developing a support network or team of other like-minded individuals who want the same things. When African American men abandon that sense of misplaced loyalty to friends that are involved in illegal activities or just basically come with a negative vibe, African American men will be able to go beyond their expectation level. ‘Boys’ that have been around since elementary school that aspire to immaturity, battery, criminal behavior, laziness, child abandonment and other worthless issues, are not the keys to a productive future.

5). President-Elect Barack Obama does not have a criminal record. Why is that important to African American men? A criminal record is an automatic blot on your future. As an African American man, you are already working with one BIG strike. A criminal record makes any positive notes in your life questionable. African American young men should steer clear of illegal activities and friends, family members and associates that participate in them. What about the brothas that are now serving time in prison and jails across the country? Use that time you have in prison to meditate on what led you on the path to being incarcerated. Stop blaming other people for your misfortune. We all know that the criminal justice system is tilted against African American men. Therefore, hanging with your ‘boys’ at the wrong place at the wrong time could land you a ten year bid. There is no excuse for being an innocent bystander. Incarceration is a cess pool of criminal education. Not rehabilitation. If you want to live a different life, take on the challenge! Malcolm X did it! Grab a dictionary and start at ‘aardvark’. By the time you get to ‘Z’, you will feel the weighty power of education transforming your life.

6). Barack Obama had the ‘audacity’ to dream BIG despite what others thought. President-Elect Barack Obama asked his advisers what they thought about him running for the Democratic nomination. The majority of these suggested that he wait another four years. But Obama thought it through and went for it! African American men should never be afraid to have the ‘audacity’ to dream BIG. There is nothing wrong with a healthy dose of confidence. Some of the most prominent African American men in history had a healthy self-esteem and and were self-assured. When you look at President Barack Obama, do you not notice that if there is a shred of doubt in his mind, you would never know it? Besides, African American women are attracted to brothas that are confident and carry themselves this way. That’s confident, not cocky like “I’m the MAN, Look at ME!” We DON’T like that!

These are just some ways that African American men can capitalize on the success of President-Elect Barack Obama and make it their own. If you are an African American man and you have never had a positive role model to look up to, now you have one. Instead of looking to the world of Hip Hop to teach you about manhood, turn the channel on your television to CNN or MSNBC and you will see the true essence of what an African American man can be. Instead of walking around with ostentatious diamond jewelry, pants below the butt with underwear showing and expensive kicks, take a page out of the elegant, smooth way Barack Obama dresses, casually and formal.

If African American men really take the time to examine President-Elect Barack Obama, they will find a deeper connection and appreciation for what he has accomplished. No more excuses! The time for excuses has passed, African American men! You are now on the radar and everyone is watching you to see what YOU are going to do with this opportunity. African American men now have the ability to erase the long, nightmarish history of abuse and degradation that have become ingrained in their psyche. It will take work and effort, but it will be worth it.

The celebration is over. Now it is time to walk in step with a positive example in front of you.