Excerpts From Nation of Islam Leader Farrakhan On Obama 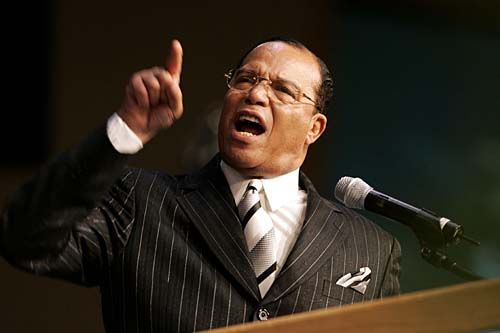 [Editor’s note: On December 10, 2008, Minister Farrakhan granted an exclusive interview to April D. Ryan, of American Urban Radio Networks, at the National House in Chicago, Illinois to offer his perspective about current events on a local, national and international scope. The following article contains excerpts of this interview.]

April D. Ryan (AR): We are in some very interesting times. We see your neighbor, literally three blocks away—the president-elect Barack Obama. What say you right now as this nation is faced with two wars post 9/11; and dealing with an economic crisis that we haven’t seen in decades?

The Honorable Minister Louis Farrakhan (HMLF): First, I’m very happy to be the neighbor of the president-elect. We are overjoyed by his tremendous victory. We are thankful to God because that which most of us thought we would never see in our lifetime, He has blessed us to live to see. Barack Obama has shown by his scholarship and his brilliance; along with the team that helped him to win the election, and the team that he is forming as his government, that he has inspired at least 80 percent of the American people with the audacity of hope that he can make a difference.

At the same time that he is our president-elect, the country—from our spiritual vantage point—is under Divine chastisement; judgment. We see it in the weather, in the tremendous storms that are touching this country from the East Coast to the West Coast; to the north and south. We see it in drought. We see it in the destruction of the farmland, and in the greed of corporate America: The inordinate self-interest of people where the nation is not first, but their bottom line is first, so they will close factories and take jobs outside of the country, leaving the American people in the lurch.

Mr. Obama comes to power at a very difficult time; and as you said, this is the worst economic time in decades. The president-elect has said that it will get worse before it gets better, so the social deterioration can result in extreme poverty and joblessness, the increase of lawlessness, and the tendency toward anarchy.

The stimulus package that brother President-elect Barack Obama is working on can help the American people for a time. America is already trillions of dollars in debt, an extraordinary burden that will be on the American people to pay back. The stimulus package that Mr. Obama is proposing that will put the American people back to work and strengthen the infrastructure, the schools and developing a green economy—this is going to be over $1 trillion, so this young man has a tremendous burden on his shoulders, and we must not allow him to shoulder this burden alone. It becomes the duty of everyone who has benefited from living in America to help that brother to help America, if he can, out of the condition that she is in.

We just saw the arrest of the Illinois governor [Rod Blagojevich]; and Barack Obama has called for him to step down. What say you on this? Also, do you feel that the legislature should be able to strip him of his power and [institute a special election for the vacant Senate seat]? Who do you think should be elected to that seat?

HMLF: I think the process can be put in place either to strip the governor of his power, wherein the state legislature may create a law that disallows the governor to choose the next person who will sit in President-elect Obama’s former seat as senator from Illinois. How the government will deal with Gov. Blagojevich is a process that has begun with his arrest. In this country a man is innocent until proved guilty. The U.S. attorney that charged him with all of these things has yet to indict him. There has been talk about what the governor said in their taping of him and what not—let that play out. The citizens of Illinois need a senator.

Corruption is a problem not only in the state of Illinois, but in America and in the world as a whole. President-elect Barack Obama said he will always tell the American people the truth. If he fulfills that promise, what a great president he will be.

We have children that love this country, who, deprived of other avenues of demonstrating their talents and gifts, have joined the armed forces of the Unites States of America. Our children love their country, and they trust their leaders to tell them the truth. On the basis of lies, this country was brought to war with Iraq. Not too long ago, a magazine article highlighted all the lies that were told by President George W. Bush, former Defense Secretary Donald Rumsfeld, Vice President Dick Cheney, and former Secretary of State General Colin Powell to get us into this mess. Look at the horror of the parents who lost their children, or whose children are coming back from this theatre of war: Destroyed—their limbs gone; mentally, a wreck. Their own government is not looking after them as the government should. Barack Obama says he has put somebody in that will look after these soldiers, these sailors, these marines.

The greatest thing Mr. Obama can do is never to misuse the patriotic zeal of America’s children who are willing to die to keep America great and free.