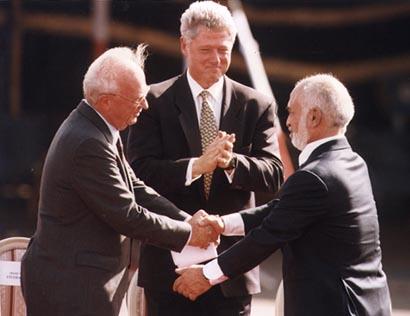 Today marks the anniversary of the peace treaty between Jordan and Israel, signed fifteen years ago near the Israeli-Jordanian border.  As we honor this historic event, we remember that peace is always possible despite seemingly insurmountable obstacles.  The courage of King Hussein and Prime Minister Rabin demonstrated that a commitment to communication, cooperation, and genuine reconciliation can help change the course of history.  Today we honor the foresight of these leaders who stared down the past’s doubters and stood together in the interest of common progress.  As we work with Arabs and Israelis to expand the circle of peace, we take inspiration from what Jordan and Israel achieved fifteen years ago, knowing that the destination is worthy of the struggle.